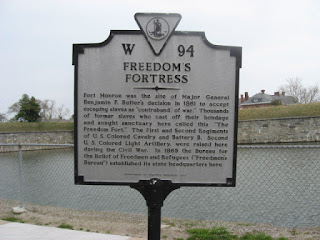 This past weekend was full of so many experiences. I had traveled to Hampton Virginia to speak at the Civil War Seminar sponsored by the Hampton Roads African American Historical & Genealogical Society conference.  This was an amazing weekend on so many levels, and I traveled down on Thursday to have time to include visiting some historical sites while there.
Many sites were on my list and among them was a special trip to Ft. Monroe. This is the site of the very first
camp for escaped slaves during the Civil War. This was the first contraband Camp.
I felt a need to visit this place, because I had ancestors who had made it to  a contraband camp. Mary  Paralee Young described how she and others---as they were following the line of Union soldiers, had made a harrowing trek on foot from Ripley Mississippi to Saulsbury Tennessee.  Once there, she and hundreds of others were put on a train and taken to President's Island Contraband camp, near Memphis Tennessee. She remained there until the end of the Civil War.
She described how on route one of the children had become lost but she had to stay on the move.

Statement made by Mary Paralee Young describing their journey to President's Island
Source: Civil War Pension File of Amanda Young
This story is significant in so many ways.
First of all, most of can remember when a woman broke the law of the land in Montgomery Alabama when she refused to sit in the back of the bus any longer.  Rosa Parks started a revolution and the Montgomery Bus Boycott started a revolution changing Montgomery and America as well.
Most of us need to know how three men---slaves of a Col. Mallory of Virginia---these three men, broke the law of the land. They sought asylum at Ft. Monroe a place in Virginia that was still under Union Army control. These three men sought asylum and were granted it by Gen. Benjamin Butler. And these three men---Frank Baker, James Townsend and Sheppard Mallory---began a quiet revolution ----a wave of thousands of slaves---who stood up, and walked to their freedom.  This was a wave began that could not be stopped.
A recent article in the NY Times describes what happened, how the slave owner sought the return of the slaves and how Gen. Butler gave sanctuary to these three men----Frank Baker, James Townsend and Sheppard Mallory--three men whose names we need to learn. They were essentially the "Rosa Parks" of their time. 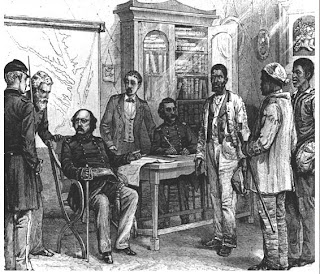 Image reflecting the appeal of Frank Baker, James Townsend and Sheppard Mallory for sanctuary
The significance of this incident should not be overlooked---for this became the beginning of a wave of civil disobedience and it is the enslaved themselves who should be credited for unlocking the chains of bondage themselves.
Like the current revolution of the masses that we have recently watched in the Middle East---we need to understand the wave of slaves---who were captured in the newspaper  illustrations of the day-----this wave of humanity---that refused to take it anymore. 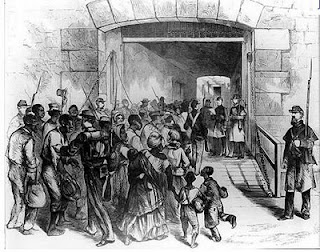 Slaves pouring into Ft. Monroe
For me---I had the honor to stand where they stood and to enter the same fortress. I could not help but to stare at that gate---and appreciate the courage of the three men who dared to enter Ft. Monroe the first time. 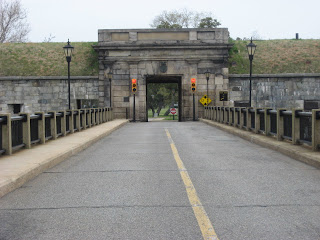 View In front of the gate leading into Ft. Monroe
A recent article in the New York Times discussed the actual incident of the three slaves seeking sanctuary and it deserves to be shared here:
When Col. Mallory learned that three of his slaves had escaped, he sent a messenger under a flag of truce to Ft. Monroe to have the slaves returned.  The exchange is described as follows:
Cary got down to business. "I am informed" he said, "that three Negroes belonging to Colonel Mallory have escaped within your lines. I am Colonel Mallory's agent and have charge of his property. What do you mean to do with these Negroes?"
"I intend to hold them."
"Do you mean to set aside your constitutional obligation to return them?"
Even the dour Butler must have found it hard to suppress a smile. This was, of course a question he
had expected.
And he had prepared what he thought was a fairly clever answer.
"I mean to take Virginia at her word," he said. " I am under no constitutional obligations to a foreign country which Virginia now claims to be."
"But you say we cannot secede," Cary retorted, "and so you cannot consistently detain the Negroes."
"But you say you have seceded," Butler said, "so you cannot consistently claim them. I shall hold these Negroes as contraband of war, since they are engaged in the construction of battery and are claimed as your property."
Source: NY Times Magazine April 1, 2011, by Adam Goodheart. Mr. Goodheart is the author of “1861: The Civil War  Awakening,” from which his article in this issue is adapted.
An Unsung Revolution
There was an incredible underground communications network among the slaves. News was often shared from one plantation to another through this amazing network.  The network became critical after Baker, Mallory and Townsend were given sanctuary and declared contrabands of war. As soon as this happened, the underground network became vital and it went into overdrive.
A wave had taken over the enslaved communities and they arrived by the hundreds.  Newspapers throughout the country began to capture images of slaves walking to freedom---with one goal---get to the Union line!! 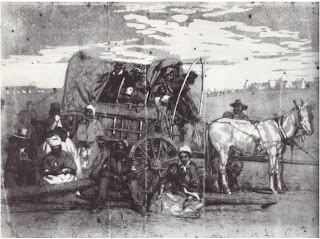 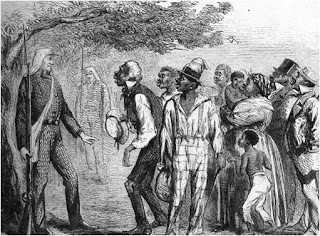 Many traveled on foot
Source:  Library of Congress 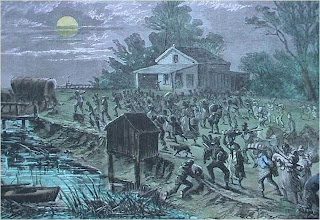 But they came by the hundreds.
Source: Library of Congress
With all of this rich history, visiting this incredible site was a must for me, because some of my ancestors were part of that revolution.
That unsung revolution of the enslaved had spread throughout the land. The underground network had led to the establishment of contraband camps in multiple states. And my gr. gr. Aunt Mary Paralee Young, was among the many who dared to leave and walk to freedom!
So to honor my ancestors, visiting the place where the dismantling of slavery began--- visiting this place was a must!
I honor them for their courage.
Posted by Angela Y. Walton-Raji at 5:57 AM

Learning this part of our history has been fascinating. I can honestly say that I had never heard of the contraband camps until you begin telling the history of them. Thank you so much for your contribution.

I am delighted that you have found the stories of the contrabands to be interesting. These are truly unwritten and long forgotten stories, and so many of us had ancestors who freed themselves and who made it to the camps!!!

I hope that you might find some in your ancestral communities as well.