In Honor of Patrick, I Was There - The Dedication of the Drennen Home, Van Buren Arkansas. 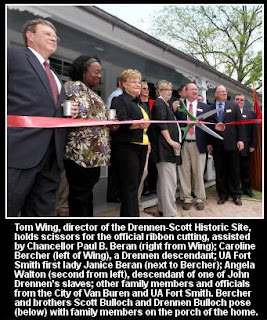 Image from University of Arkansas Ft. Smith at Dedication of Historic Drennen Home. I attended in honor of my ancestor Patrick who was a slave at this estate. Source: Van Buren Press Argus
This past week was more than amazing.  I had been invited to attend the dedication of an historic home, in Van Buren Arkansas, where some of my ancestors had once lived, toiled and died, enslaved.
My oldest known ancestor in this line, was named Patrick. I learned of  his history from a Civil War pension file---that from Lydia Walters Talkington.  She and Patrick had been allowed by their masters to court and they had hoped someday to marry each other. However, the times as they were, in addition to fate, would not allow that to happen. But in that file, she discussed how Patrick Drennen was allowed to come and visit her in Dripping Springs, (near what is now Figure Five, Arkansas.) 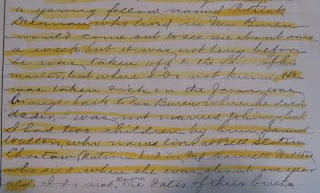 From Civil War Pension File of Lydia Talkington, widow of John Talkington(Tuckington)
a soldier of the 83rd US Colored Infantry
Patrick and Lydia had two children, a son Samuel, and a daughter Harriet. The girl ,Harriet would die while a young girl, but their son Samuel would live to adult hood and he would eventually marry my gr. grandmother Sallie, a former slave from the Choctaw Nation. Patrick, it was revealed was a slave of the Drennen family. This family was headed by John Drennen, founder of the town of Van Buren, Arkansas. Patrick lived with a family of slaves at the Drennen home. (A sister is said to have escaped to freedom while traveling with the Drennens in a northern city.) 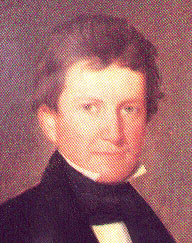 This deposition of Susan Austin, a close neighbor of Lydia, mentioned that Patrick was  indeed
a slave of the Drennens of Van Buren, Arkansas.
John Drennen died in 1855 and is buried in Van Buren's historic Fairview cemetery.

Photo from Find a Grave Site by Find A Grave User Tammi
Several years ago, I learned through my friend and fellow researcher Tonia Holleman of Van Buren Arkansas that Lydia was buried at the same cemetery in a family plot down the hill.  Ms. Holleman also discovered from the cemetery sexton's record that Patrick, my ancestor was also buried in the same cemetery.  Interestingly, Patrick was buried in the family plot of the Drennen family.
She took me to the cemetery and we walked around the plot.  There was no sign of Patrick or where he rests.  He was buried in the seemingly bare space behind that of John Drennen. It was later noted that some small bricks outlined his grave.  These bricks however, are easily missed as grass has now grown over his burial site, however, the space is clearly there, with no headstone.
Last winter while in Arkansas for a conference, I visited the Drennen plot, and could only see one of the bricks faintly showing through the grass and the snow that was melting.  I collected a few dried magnolia tree blooms, and placed them on the stones that outlined his grave.  I wanted to take note of his burial place. 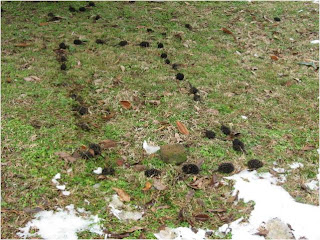 Burial site of Patrick Drennen outlined by dried magnolia tree blooms
About three years before, (in 2008) I had also decide to purchase a small marker to place over my gr. gr. grandmother Lydia's grave.  There was a small family plot down the hill.

Family Plot in Fairview Cemetery
It was Ms. Tonia Holleman who suggested that I also consider placing a memorial marker for Patrick as well.  Since, thanks to her,  I knew that Patrick was buried in that cemetery, and since my family owned the small plot, down the hill,  I could just as well  purchase  a small stone to be placed in his memory.  After all he had lived a full life---though short and for over 150 years he had rested in Fairview cemetery with no marker honoring his brief life.
So I purchased a small marker for him, as well, and had it placed it place next to the one for Lydia, because they had loved each other, and had planted the seeds for our family line.  And so, it was placed there. 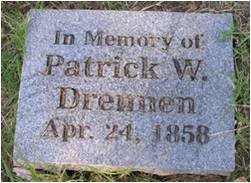 Memorial marker for Patrick Drennen in Fairview Cemetery
However----last week, while at the Drennen Home dedication, something unexpected and very significant happened. After the ceremonies were over, Prof. Wing arranged for a short meeting between myself and the members of the Drennen family descendants.  It was pointed out that Patrick my ancestor was actually buried in the family plot--which they did not know.  It was pointed out that he also did not have a marker.  The question was posed to the family---would they object to Patrick---my ancestor having a stone place in their family plot? I was surprised and my heart was warmed.
Everyone said that there was no objection of any kind to his having a marker bearing his name in the family plot.
To say that my heart was warmed, is a mild statement.  All I could say was simply, "thank you, thank you."
So at long last---my ancestor Patrick will have his name place over the site where his body rests.  He will be remembered and his name will be known now by all visitors to the site. They too, will see his name and will be able to say his name aloud.
For me---that moment was the most precious moment of the day.  My journey was more than worthwhile---my ancestor's name will now be known.
In honor of Patrick I was there. What a special day it was.
Rest in peace, gr. gr. grandfather Patrick.
Posted by Angela Y. Walton-Raji at 4:16 PM

very nice and so proud of you!! Congrats

Hello mrs.walton-raji , my name Marcus Reese . Which I have been researching my family ... Which I was informed my 5x grandfather is Parrick drennen ... Which means a lot of to me and the rest of my family . I'm assuming we are relatives ...

Hello, I went through the the Leadership of Crawford County class today and the story is still being told about Pratrick. I am so proud that you found him and know it has made a wonderful impact in your life. Have a blessed day.