Old Family Bible Belonging to my Gr. Grandfather Samuel Walton
I have decided to join the fun with a Geneameme. I saw a post on Twitter  where a number of genealogy bloggers are typing things about themselves by making 40 statements about their genealogy and their genealogical research. I am not sure who started the Geneameme but it looks like fun, so I decided to join in as well. And I decided to enhance my list a little bit with a few images.


The Ancestors' Geneameme:
The list has been annotated in the following manner:
Things I have already done or found: bold face type
Things I would like to do or find: italicize (colour optional)
Things I haven’t done or found and don’t care to: plain type-not bolded [Comments are placed in brackets after each item ]

Which of these apply to you?

L to R: Georgia Ann Houston Bass, Louis Mitchell Bass, Sallie Anchatubbe Walton, Samuel Walton
4. Have an ancestor who was married more than three times [Not more than three---but Gr. Grandpa Samuel Walton did make my gr. grandmother Sallie his third wife.]
5. Have an ancestor who was a bigamist [not found one yet]
6. Met all four of my grandparents [Only had my one grandparent--my dad's mother]
7. Met one or more of my great-grandparents [Yes, Sallie--we called her Nannie, was my heart.]
8. Named a child after an ancestor.
9. Bear an ancestor's given names.
10. Have an ancestor from Great Britain or Ireland [Well according to 23andMe DNA company, I have 25% European ancestry (who knew?) but the several 3rd to distant cousins showing up on the family finder appear to be quite German. (again---who knew?) ]

11. Have an ancestor from Asia [Well 23andMe DNA---says I have 8% Asian. But it is probably the native ancestor showing up as DNA companies do not make a distinction between Asian and Native Am.]

12. Have an ancestor from Continental Europe [According to 23andMe I do]

13. Have an ancestor from Africa [Indeed, and from Nigeria/Niger according to three DNA tests]

14. Have an ancestor who had large land holdings [Gr. Grandpa Mitchell Bass and son Irving had over 200 acres of land in SW Arkansas.] 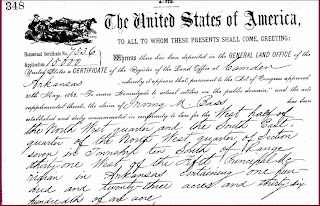 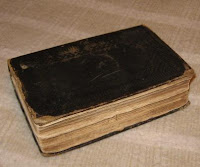 Angela, I appreciate you taking the time to join the meme.
Thanks so much for your thoughtful responses – I thoroughly enjoyed reading this post.

I like the way you added photos and stuff. I wasn't going to do this meme but you have inspired me. I will do it tomorrow. And I have to go check that Bible my grandfather inherited from his brother who got it from someone who was gifted it in the 1800's . Does that count?

Thanks Geniaus for starting the meme! It was tons of fun and I am enjoying reading others as well!

I would think that it would count!
Looking forward to reading yours!