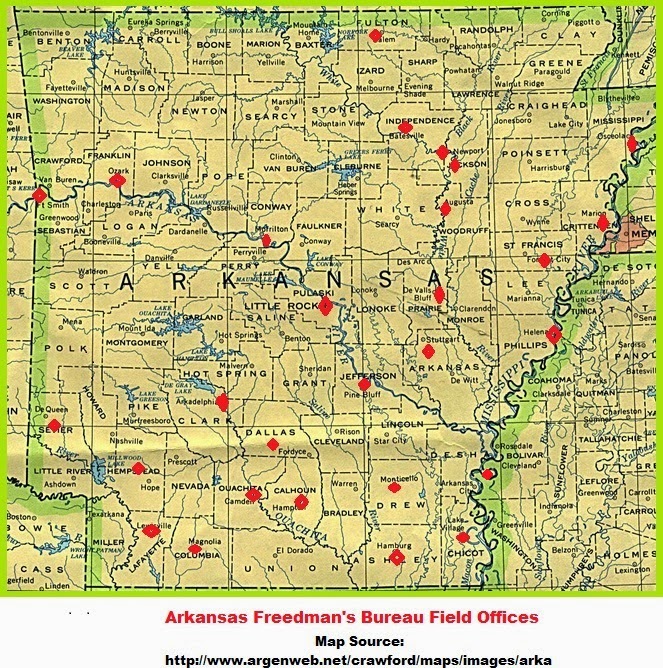 When researching African American families, one essential part of the family is the story of their transition to life as free people, if they were once enslaved. This story is often overlooked and many researchers will research the family to 1870 and immediately start to look for the last slave holder. But many things occurred in those families between freedom and being enumerated in 1870. Some of those stories will be found in Freedman's Bureau records, also known officially as the Bureau of Refugees, Freedmen and Abandoned Lands, or simply Record Group 105.

These records can be a challenge, as they are basically un-indexed, but beyond that, many researchers are not sure that if their even family used the services of the Bureau. The question arises, "if they were served by the Bureau, which Field Office would they have used?" In addition, many researchers are not aware of the location of the various field offices within their own state.

Since Arkansas is one of my ancestral states, I decided to locate a map of Arkansas, that reflected the various counties, and I have put a red symbol (♦ ) to mark the location of the offices.

It is understood that maps are essential tools in genealogical research, and in this case a clear understanding of the location of the bureau's offices should be considered a part of the historical geography of the state. If one has ancestors who lived near more than one Field Office, it would be wise to explore the offices of the "other" Field office as well, to see what is there.

To determine where they offices were I used the Descriptive Pamphlet produced by the National Archives. 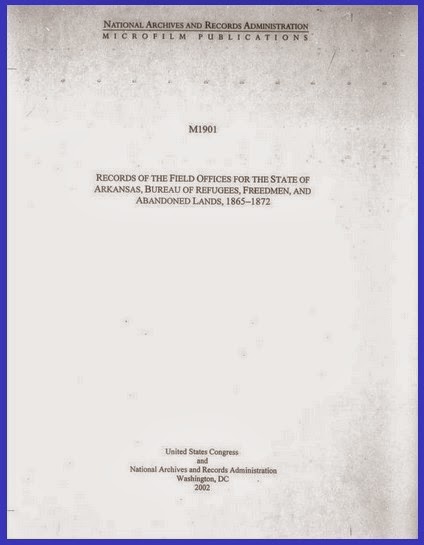 (This booklet can be downloaded directly from the National Archives website.)

However, by marking the location of the field offices I now have a better idea of where to research. Also when learning the early history of the county, seeing these records can be useful to learn about the lives of the associates and neighbors of one's ancestors.

The Freedman's Bureau locations that I have marked on the map are:

Slowly, more records are becoming digitized, and this critical record set should become essential for all researchers of southern history.

This is a GREAT idea, Angela!! I sure wish I had some Arkansas ancestry. I know I can always count on you to come up with wonderfully helpful ideas for research.
Thanks, Alva

This needs to be done for Mississippi, love this idea for research.

Thank you so much for your wealth of information. More Arkansas History!

I really appreciate your wealth of knowledge and sharing your AR History . Thank you!