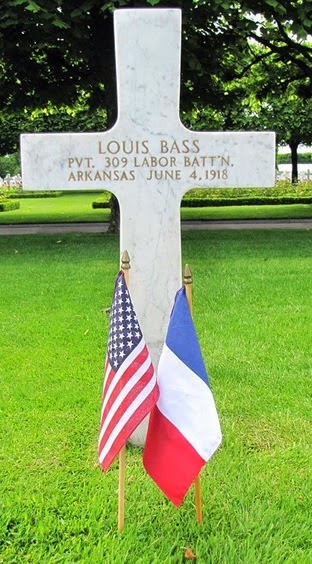 Pvt. Louis Bass died on June 4, 1918. He was a quiet man from Horatio, Arkansas, who was serving in the 309th Labor  Battalion in France when he died. He never made it home, and the family has never seen his gravesite. But at long last a color image of his headstone and his final resting place has been shared and it can be treasured by following generations forever.

In a previous article, I wrote about my great grandmother Georgia Ann Bass whose son Louis Bass died in France. She was eligible to make a trip to France to visit his grave as a Gold Star Mother. But she was getting on in years and was unable to travel to France. She also did not live too long after the invitation was received. But had she been able to make the trip, this is the grave site that she would have visited, for this was the son, whom she had lost.

Today on the 96th anniversary of his death, the American Battle Monument Commission, posted the image of his headstone, and honored him.

This is the perfect ending to the story, and now thanks to technology, although our great grandmother never got to see this image, now the entire family around the world can see this headstone and view his final resting place.

A humble man from Horatio Arkansas who rests in France can now be forever remembered.

I want to let you know that your blog post is listed in today's Fab Finds post at http://janasgenealogyandfamilyhistory.blogspot.com/2014/06/follow-friday-fab-finds-for-june-6-2014.html

Have a great weekend!

Great Story! Glad we can see his Headstone. I wish to know all the stories behind those headstones. Thank You..

That is a wonderful tribute.