The Missing Migration of Our People & Why They Can't be Found

My ancestor Amanda Young was a young girl when in 1833 she witnessed the "Night the Stars Fell" , a spectacular meteor shower seen all over North America. I have written about this and told the story many times.

Years later, I learned that Amanda's parents were John and Martha Young, who were actually born in Virginia, who in their later years, ended up in Mississippi. They were first taken to Tennessee from Virginia, but, the exact location of their Virginia origin remains unknown, after 30 years of research.

On another line, I have an ancestor who was Lydia Walters Talkington. She was brought to Crawford County, Arkansas while a small girl, right around the time of Arkansas statehood, around 1836. She was born in North Carolina, when she arrived with the Walters and Harrells. Her parents names are not known to me, and have never appeared in any record. The only knowledge of her origin is found in census records stating that she was born in North Carolina. Her years after arrival were in Dripping Springs, Arkansas, and later the town of  Van Buren.

Was she brought with her parents, or was she, like thousands of others brought west and south during the domestic slave trade? Was she among other children, and separated from her mother and sold like horses or cows, to someone and then brought west? I have never been found her parents, and most likely never will.

And there are my ancestors from Indian Territory in the Choctaw Nation. My great grandmother Sallie Walton was the daughter of Amanda Perry Anchatubbee. Amanda's mother was Amanda whose mother Kitty Perry who was a slave of the Perry family of Skullyville in Indian Territory. Kitty was taken from Mississippi, and survived the removal of Choctaws from Mississippi to Indian Territory in 1831. I ask the question, "How did the Perry's obtain their slaves"? And of course I was to know, "who were Kitty's parents"? That paper trail has also come to an end.

I cannot help but wonder if she or her parents were also marched from another state to Mississippi. The Perry's, I know came from Yalobusha County Mississippi. Did they purchase slaves before they relocated to the west? And was this a purchase of one of the slaves brought to Mississippi on Slavery's Trail of Tears? That will most likely never have an answer.

An article from November 2015 of the Smithsonian Magazine, illustrates a long forgotten march that occurred almost 200 years ago. That was the movement of thousands of enslaved people, from the east coast to the deep south. The countless stories of origin of those hapless souls now forever lost to time, all chained together with no hope of release until their destination was reached--Tennessee, Mississippi, Arkansas, Louisiana, and other places never to be known. This was Slavery's Trail of Tears.

Fast forward to the 21st century, where millions of people, curious about their own history seek information. They pursue census records, military records, and much more hoping the find evidence of their past. And they, like many others hit the wall of 1865.

After finding ancestors in the 1870 census, they seek the stories of the early days of freedom. They look to the Freedmen's Bureau, the Freedman's Bank, and other records showing them in the first years after slavery ended. If they are fortunate, some will find ancestors in a probate record, listed among other enslaved people on a white slave holder's will or estate inventory. And then---all paper evidence comes to an end. There are exceptions, if one has free people among their ancestors. And a small few are fortunate to follow wills and records into the 1700s. But the vast majority will encounter the heartbreak of slavery era research

Like many, their ancestors were among the hundreds of thousands who were gathered, separated and then marched from Virginia and other coastal states, westward and southward, never to see their point of origin again. The untold stories of the domestic sale and trading of slaves, was an integral part of the nation's past.  Yet, it is not spoken about, and is basically unknown. This forced march--this forced separation of families--this forced treatment of human beings is the one sole reason that most searches will end in the early 1800s. That is the painful and sad reality of slavery in America. As the article note, they were marched on foot from the "tobacco south to the cotton south". This is the heartbreaking story of our ancestors.

Because of this march---many of us, will never find any paper trail beyond this point. 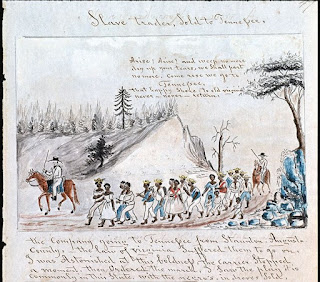 The Smithsonian described this march as the largest known in our history:

"This forced resettlement was 20 times larger than Andrew Jackson’s “Indian removal” campaigns of the 1830s, which gave rise to the original Trail of Tears as it drove tribes of Native Americans out of Georgia, Mississippi and Alabama. It was bigger than the immigration of Jews into the United States during the 19th century, when some 500,000 arrived from Russia and Eastern Europe. It was bigger than the wagon-train migration to the West, beloved of American lore. This movement lasted longer and grabbed up more people than any other migration in North America before 1900."

The possibility is that many of the largest slaveholders, including those in Indian Territory may have acquired slaves who had been already marched from this forced relocation of slaves. and clearly the slave traders from whom they purchased slaves were participants in this horror. As much as we want to know---we cannot scale that wall of thorns, keeping us from our past. 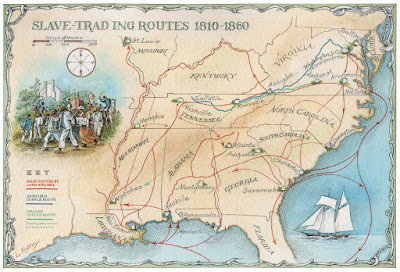 However, the critical role that we must play is to become the caretaker of our recent history.
Our task, is to find the methods of how they survived, and how they thrived and to tell their stories. It is the resilience of the survivors that provided the platform from which many of our own families emerged. They endured unimaginable hardships but their suffering has lead us to whom and to where we are today.

May their souls rest and may they guide us from places beyond, and may we be filled by their strength, for they are the source of our strength.