"Old Tom" in Grant County. A Disappointment and an Opportunity 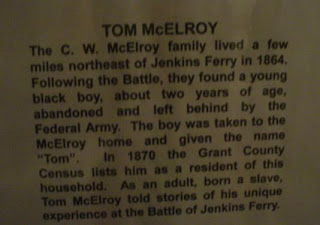 The recent story of Thomas "Moses" McElroy the child found in a log, was well received by  many people who read it. I have spoken to researchers from California to Virginia, and have received remarks from many who read the the remarkable story of a small child found abandoned in the woods near the Battle of Jenkins Ferry.
Several friends and colleagues in Arkansas have also taken an interest in the story and we are close to being able to identify the descendants of Thomas, the child who lived to adulthood and who survived the terrible times of war, during the years of his infancy.  Thanks to Emilee D. Mason, the story of the child found in the war, was known.
Becoming interested in finding more about the story of Thomas and possibly locating descendants, one of my colleagues has located some possible descendants, and she has taken it upon herself to go to the historical society and museum of the county from which the families came---Grant County Arkansas.  This is also not too far from the area where the Jenkins Ferry battle was fought. Grant County is also the ancestral home of the McElroys black and white who lived in that part of the state for more than a century.
What a surprise to see the story of Thomas McElroy reflected in the Grant County Museum.  On one level it was a nice surprise that the story of civility and humanity shown towards a small black child was remembered,  and the small anecdote of his rescue was remembered.  But oh----what a shock and what a disappointment to see how "Old Tom" was depicted.
There it stands----a caricature----a small, thin black figure dressed in a grey uniform, holding a rope!  A rope????  Yes----a rope.  And the sign in front of this figure is that this represents Thomas McElroy. 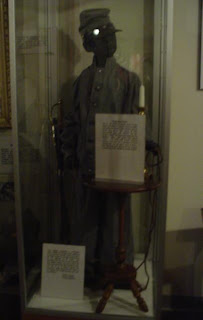 Depiction of Thomas McElroy in Museum
wearing gray Civil War uniform and with a rope in hands
Photographed by Carla Coleman
Now---revisiting the story-----Thomas McElroy was an infant found in the woods----and he was not old enough to have been a soldier on any side---he was a casualty of war---a victim  a mere child.
The depiction in the Grant County Museum of a black child wearing an over sized grey uniform, holding a rope (with all that a rope connotates in a region of sundown towns) ---is a shock, a disappointment, and sadly it is also disrespectful.
Being so close to the battle site of Jenkins Ferry---where a good number of soldiers from the 83rd US Colored Troops lost their lives (including one of my ancestors) how saddened I am to see the only representation of African American presence in that community, being that of "Old Tom" turned into a whimsical caricature,  wearing an ill-fitting uniform of an army in which he would have never served.
And the rope????
Well to me, it trivializes him, trivializes his humanity as a victim of a tragic time, it drives a subliminal message of something that did not take place during his infancy and the many horrors that took place (with a rope)  in years that followed. During the Civil War, Thomas was a a mere infant, and he wore no one's uniform.
Old Tom's misrepresentation was not the only representation of the African American presence in the entire museum.
There was a story of Phereby, a slave in Alabama who was hung for having attacked and killed her mistress.  The real incident took place in Alabama----and the story had nothing to do with the history of the county---but there it was a image of the enslaved woman with a rope around her neck being led to her execution. One can only ask--why is this image of a slave woman's execution in Alabama in a museum that focuses on the history of a county in Central Arkansas? 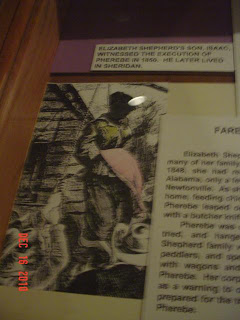 Image Depicting Execution of the slave Phereby in Alabama
And there was also the story of Harriet---a woman who was enslaved, whose only story is told by her headstone,---she lived and she died a slave. And her original headstone lies in the museum. The original stone!!  According to the caption---the descendants of the slave owning family said it was ok to remove the stone from her grave for a more "suitable" one.  Huh?  Her grave was in the slave holder's family plot, so removal of the only stone of the slaves was allowed. 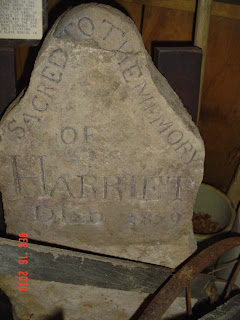 Original Headstone of Harriet an enslaved woman from Grant County 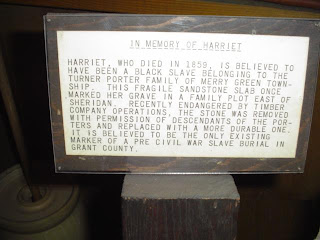 Description of the story of Harriet the slave
The stone itself is a beautiful stone, and clearly during her lifetime, she was loved, and the care that went into the creation of her stone, was evident that she was a woman who was loved.  Nothing more of her story is known.
Since writing the piece about Thomas McElroy, several descendants of the McElroy's are becoming interested in this unusual story of survival and there is much discussion and a renewed interest in family history among them, and for that I am glad.
So what can one make of all of this?
As disappointing as the depictions of the African American people are presented on the local level---this is an opportunity. It presents a clear need for the local African American community to address the preservation and to tell those stories that need to be told from the community. My hope is that more will become inspired to tell the stories that reflect the people who lived in dignity on the soil of that county and upon the soil wherever the ancestors lived.
To neglect one's history allows others to trivialize it, to misrepresent it, and to disrespect it.
My hope is also that the older grave sites of many people from this family (including Thomas and his wife Paralee) will also be located, and more of the family story can be told.
This is our charge to tell our stories, document them and preserve our history! This is a tremendous opportunity.
Posted by Angela Y. Walton-Raji at 12:51 PM

This is truly disturbing.

Great post, Angela. Another reason why it's so important to tell our ancestors' stories.

All I can say is Wow, what a story.

Wonderful post. And another great reminder of why we need to be the voices of our ancestors.

Disturbing on so very many levels. Presumably the exhibits have been there for years. I hope that you or your colleague have expressed your concerns to the museum.

I have discussed it with her, and we are thinking of writing a formal letter expressing concerns. On one level it is good that the Thomas McElroy story was remembered, but there are some areas in which their own level of sensitivity needs to be addressed. The area is geographically in an area where many families were driven from the community years ago, so there is also still some fears on the part of many to even visit that area.

However, perhaps an honest discussion and a desire to share data that they do not have, might improve their representation of the community as a whole.

Thank you Angela for your blog. I was proud of Thomas until I saw him in the case. Whose freedom was he fighting for? Was he happy being the property of another human-being? Oh! but Thomas was an infant or small child when the Union Soldiers tucked him away for safety. What would his descendants think? There is much work to do. When I saw the jet black ghostly image of a male figure in a gray Civil War uniform I was confused. Why was he holding a rope? The faceless, soul-less image did not go with the story that I read on the blog or census report. How have others received their visit to the museum? If this is a museum of history, then anybody reading the story about "Moses" Thomas McElroy and seeing that image would be confused too. His family should be proud that he survived and they are a part of his legecy. Where are his descendants?