So, What is a Jeanes Teacher? 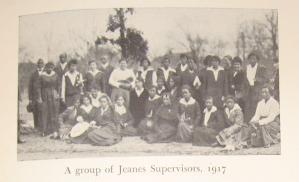 In April of this year, I wrote an article about some African American children depicted in a series of children’s textbooks in 1938. The books were created during the height of the Jim Crow era, and the school reader gave black children images of other black children enjoying school life and enjoying learning. Instead of illustrations-----this series of books used actual photos of the children from the town of Drumright Oklahoma in 1938! 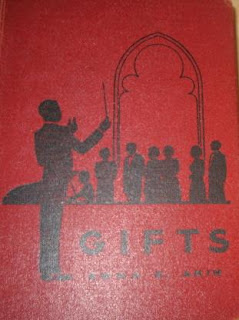 Gifts, by Emma Akin published in 1938
The book Gifts, by Emma Akin was particularly interesting, as I learned about an entire community of children and an interesting teacher who was part of an army of teachers devoted to teaching in the rural south.  These children from this text were all living in Drumright, Oklahoma.
In this particular reader, instead of Dick and Jane, there were Johnnie Mae and Floyd and their younger sister, Clara Bell. They lived on a farm in the country instead of Maple Street, and they attended Wheatley School named for the poet Phyllis Wheatley. The stories were sweet stories, but one of the stories in the reader especially caught my eye and made me ask questions. 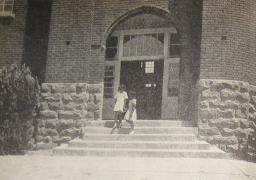 Front of the Wheatley School
To summarize the story from the reader----A woman walked onto the playground one day while the school children were on the swing set. She went over towards them and introduced herself. “My name is Miss Willa Green. I am the Jeanes teacher.” 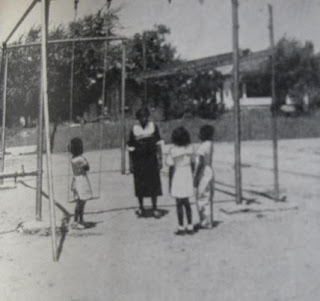 Miss Willa Green meets the children on the playground.
Image from Gifts, by Emma Akin
One of the children takes Miss Green inside of the school to meet his own teacher.  “Mrs. Johnson, this is Miss Green, the Jeanes teacher.” 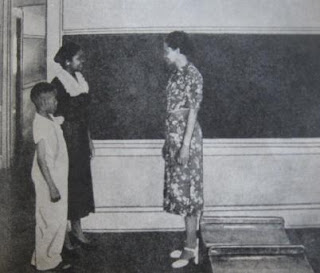 The Jeanes teacher is introduced.
Ok----now up till that time I was following the story until Miss Green told the children that she was a what?

The school reader told the story of a woman a century ago, who saw a need to help black children in the rural south to get a better education. The woman was Miss Anna T. Jeanes. 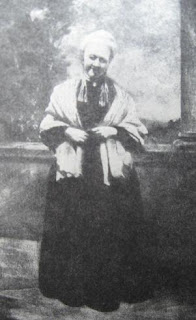 Miss Anna  T. Jeanes
The goals of Miss Jeanes teachers were spelled out in the reader: 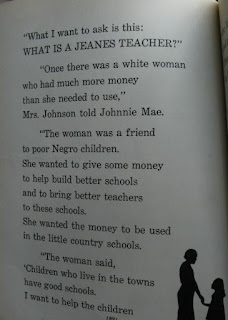 So it appears that a foundation was developed to train teachers and to bring services to the classroom and to the families of rural children as well.
Now prior to learning about the history of the Jeanes teachers, I had heard of the Rosenwald Fund, but the Jeanes Foundation was not known to me.  I was curious to learn more. After Anna Jeanes donated her funds, a suitable "first teacher" was sought and found. Miss Virginia Randoph was selected as the very first Jeanes teacher. She began teaching in 1908.  By 1939 there were over 500 Jeanes teachers in the rural south. 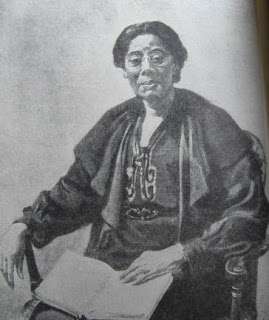 Miss Virginia Randolph, the first Jeanes Teacher
I became more curious about these teachers, especially since I had never met anyone else who had ever heard of them.  I asked some whom I knew who had worked in the school system, in Arkansas and in Oklahoma, but none were familiar with Jeanes teachers.
This school system from which the book was created (see my blog post from April) came out of Oklahoma. But I had questions---
Did they teach in every southern state?
How were they assigned?
How did they relate to the community?
I would later learn that in many places the Jeanes teachers were referred to as “supervisors”, for they brought more than just classroom instruction, they worked with the communities as well. But my basic questions would remain unanswered for years.
Then, in the 1990s while attending a used book sale, I was browsing through a number of old books discarded from some libraries, and I found it----a book whose title I could not overlook---“The Jeanes Teacher in the United States”! 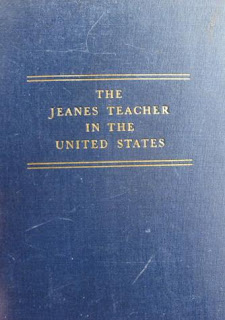 The Jeanes Teacher in the United State
by Lance Jones 1939
What a find! This book actually provided detailed information on the history of  the Jeanes teachers and their training, as well as their work in multiple states.  And---the book had photos of teachers and some of the schools where they worked. Apparently this copy was a discarded book from an old library and here it was showing up for sale. 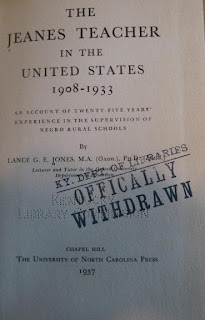 This was amazing!!  I learned that the Jeanes "supervisors",  were fully trained and integrated into small rural communities, training both local teachers and parents of the school children in methods of making their lives better, especially during the harsh years of the depression. 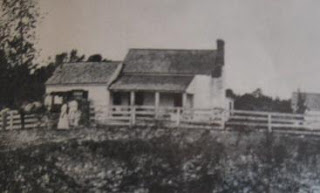 Jeannes Supervisor Making Home Visit - Charles City VA
Source: The Jeanes Teacher in the United States by Lance Jones 1937
I learned that there was cooperation often between Jeanes teachers, and representatives of the Rosenwald Fund, and the Slater fund as well. 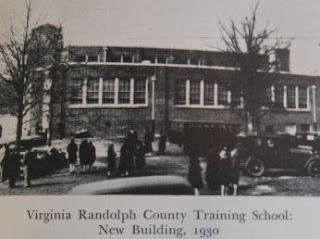 The Randolph Training School 1930
Source: The Jeanes Teacher in the United States by Lance Jones 1937
I learned that though most were female, some of the Jeannes supervisors were men.
In the early 1990s after relocating to Maryland,  I attended a local genealogy meeting and one of the members of the group indicated that she was beginning graduate school in history, and a "treasure chest" was found that once belonged to a deceased cousin. The treasures inside of that old trunk would lead to her master's thesis. You see, it turns out that her deceased relative had been a Jeannes supervisor for several decades.
Wow!!!!


After many years, I not only ran into someone who had not only heard of the Jeanes teachers---she had a relative who was one of them.  The treasure chest was indeed that--- several decades’ worth of letters, memorandums, reports about her years as a Jeanes supervisor, and her experiences throughout the country. Incredible!!
To shorten a long story, my friend Dr. Donna T. Hollie, continued her graduate studies and ended up writing her doctoral dissertation about the Jeanne's teachers and earned a Ph.D. in History from Morgan State University being one of the first (if not only) scholar so well versed in the history of the Jeanes teachers! (Her dissertation title is: I Consecrate Myself to the Service of Teaching: The Jeanes Teachers, A Case Study in Fauquier County Virginia. )
Another footnote---about a year ago, I was watching a small clip from the movie Sounder. This was the movie about the black share cropping family having to survive on their own when dad was taken away to prison after being unjustly accused of theft. Well, there is a scene in the movie where the young boy comes upon a small rural school, miles away from his home. It is a country school, and he enters the classroom while class was in session, as he had cut his hand and needed some help. The teacher pauses the lesson and helps the young boy, and she introduces herself, to him and says, "My name is Camille Johnson. I am the supervisor at this school."  The supervisor---she was--- the character  in the movie was a Jeanes teacher!!!

This scene from Sounder the teacher introduces herself
as the "supervisor" of the school.
Sounder  1972 : Director Martin Ritt
Writers: William H. Armstrong (book), &  Lonnie Elder, III

I have learned a great deal over the years about the dedication of these devoted teachers to the schools and the communities where they served. They became an integral component of the communities and brought enlightenment to so many in need, in the rural south.
For me----this introduction to the Jeanes teachers and the Jeanes Foundation, was a wonderful lesson about this widely unknown history.
I often talk about my “discovery” of the Jeanes teachers that I found, in a small Oklahoma elementary school reader. But this is not just an interesting story to be stashed away with other interesting tidbits----my awareness has been sharpened.
I still keep my eyes open and I wonder if I will find remnants of more Jeanes teachers.


When I visit small southern communities, I always am drawn to the landmarks---the older black churches the cemeteries, and the Rosenwald Schools. These old schools interest me, because it was often the Rosenwald Schools where so many Jeanes teachers worked!
My introduction to this small but significant army of teachers, has opened my eyes again to another fascinating chapter in American history.  It is the story of the will to survive to persevere and to grow and to educate those in need---which all people share, regardless of all backgrounds.
The story of the Jeanes teachers is an American story.
So, my quest to learn even more, continues.
Posted by Angela Y. Walton-Raji at 2:55 PM

What a great story and a wealth of information you have here!

Thank you Kristin, I am glad that you enjoyed it!

This is indeed a fascinating subject. Some of my favorite books involved teachers in remote rural areas who, together with their students, had to overcome hardships and disadvantages. The Jeanes teachers certainly fit this profile, and then some. I hope to read more here about these dedicated teachers.

So very interesting! Exciting to learn of the important role they played in empowering young people and communities, too. Great work!

They did amazing work and yet, their work is largely unknown. Our job is to tell those stories, when we find them.

I agree Greta, we take so many things for granted when people who lived in those rural communities had so many more obstacles in their day to day lives. And it is there on the rural soil that we really find the spirit of the people! And thank God for those teachers who ventured into such communities to bring something new to their lives.

You always find the most interesting things about our history and always tell the story so eloquently.

Great post, Angela. I will be checking to see if any of my ancestors, many of whom were teachers, and some who taught in (and/or attended) Rosenwald Schools, may have been Jeannes teachers.
By the way, I was interested in Donna Hollie's dissertation, but the link that you provided wasn't working.

A great story! I learn something new everyday. Thanks for sharing this.

Thank you for sharing this incredible story with us. I learn something new everyday reading the genealogy blogs. Congrats on the "AHA" moment of finding the book. Those are the best moments!

So glad that you found the story! It is a wonderful stories and the impact that Jeanes teachers made on so many communities should be told.