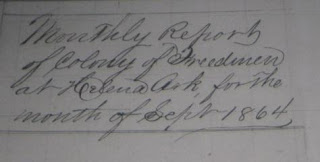 Document reflecting "Colony of Freedmen in Arkansas, 1864
While on a recent trip to the National Archives I decided to look into some records from eastern Arkansas, to see what could be learned from the Freedman's Bureau documents.

Remember these facts:
The Freedman's Bureau was created after the Civil War and after slavery was abolished to provide assistance to newly freed slaves as they negotiated life for those first years after freedom.


The Bureau was officially known as the Office of Refugees, Freedmen and Abandoned Lands.

Imagine my surprise to come upon several pages of microfilm among the records of the Bureau, and to see the year 1864!

Wait----1864---the war was still going on and more than 6000 black men had fled to Union army lines and enlisted in the Union Army. On my Arkansas Freedmen website I devote a good portion of the history to the Civil War and I do have general information on the US Colored Troops organized in Arkansas during the Civil War. But imagine my surprise to find, in the midst of a record set pertaining to freed slaves after the war, a set of documents reflecting the fact that a possible colony of newly freed slaves also had formed during the war.

As I looked more closely, this refugee camp for ex slaves was organized, with several schools:  According to the report, there were 6 schools for Freedmen in the city of Helena, and 1 at a site known as Camp Freedmen.

Now this information is valuable for two reasons: 1) It reflects some of the local history----six Freedman schools.  How amazing to see so much interest in education almost immediately.  2) There was an official Freedman's colony.  This is exciting as it indicates as early as 1864 that there was organization being put to work to educate the children and to assist with the adaptation of the former slaves to a new life.

I wondered where this camp---quite clearly a contraband camp was located. Well, sure enough there was more information about the camp.

Location of the Freedman's Camp
Source: RG 105, National Archives M1901 Reel 6
Transcription of document
"The camp is situated on a home farm near the Fort, and in as healthy a location as could be selected and with plenty of water convenient.  Each family has a small garden connected with their house. We have reduced the number growing rations from the government, since the 16th of March, from two thousand down to 2 hundred sixty. Some sickness prevails at the camp but the people appear to be happy with their education and religious privileges."
There was additional data about this camp.


I had to pause and reflect on what I was seeing. War is a time of chaos and confusion.  In spring of 1864, slavery still had a hold on people in the south and yet, some dared, once the Union Army was close, to make that dash for freedom. Here was a settlement of ex-slaves now breathing their first breath of free air, and there was immediate interest in education and providing structure to their lives that interrupted the pattern that they had known. So as they seized their freedom, there are some documents left that reflect the efforts to bring structure of a different kind into their lives. 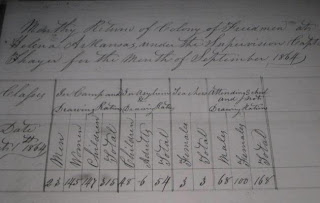 Document reflecting those receiving rations at the Freedman's Camp, Helena Arkansas, 1864
Source: RG 105, National Archives M1901 Reel 6
On document listed the supplies listed to run the camp efficiently.  At first it appeared to be list of no historical interest, but then I looked at it again, more closely. 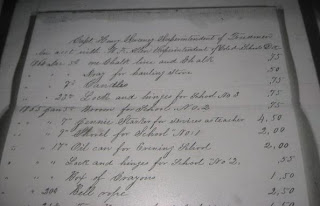 Supply list for Freedman's Colony
On this list was a request for an oil can for the Evening School.  An evening school?
How strong the desire to learn must have been---there were already six schools in the city of Helena in 1864, and at the Freedman's colony and it also appears that there was an evening school.
My guess is that it might have been the adults who attended the evening school. The simple inclusion of a lamp for the evening school reveals so much---these people once enslaved were so anxious to get on with their lives, and learning would be their key to a new life and a better life.
Researcher Dr. Alisea McCloud has identified a number of contraband camps in Arkansas  I wonder if any of the camps that he mentioned could have been a camp that emerged from Camp Freedmen.  On her site, Dr. McLeod mentions Camp Deliverance, Camp Wood and Camp Deliverance  Was Camp Freedmen one of those camps?  I don't know the answer to that.
But I glad to see a reflection of what was happening during the war, to the women and children left behind, and to see how they fled and took refuge at the contraband camp, known as Camp Freedmen, I see that by escaping---they formed their own act of resistance---they seized their freedom and began a new life.
There are no images of ex slaves in contraband camps in Arkansas. But their are images of other camps, some reflecting order and some reflecting the hardship even in freedom. 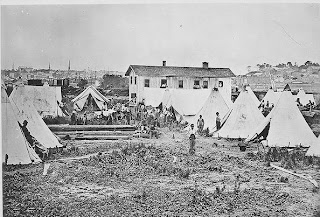 Contraband Camp, Richmond VA
Source: National Archives and Records Administration, Matthew Brady Collection
Another interesting part of this history is the reminder that the Freedman's Bureau also reflected the white refugee population as well.  War bring chaos into the lives of everyone in the community, and the records also reflected portions of the white population also served by the same Bureau. 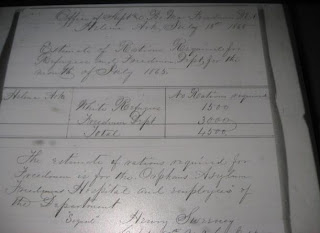 White refugees were also reflected in this record set.
I did not set out with the intention of studying eastern Arkansas, and was in fact there to research some Civil War soldiers.  But while waiting for the original records to be pulled, I decided to take a look at the Helena Arkansas Field office, and I was able to glean additional information about a community. In this case, the strong desire to learn and to educate their children stood out.  The fact that so many had arrived at the camp, as early as March 1864 suggests that many had truly escaped to freedom.
I will return to continue this search, but was thrilled to find some unexpected data on life in eastern Arkansas, from those who fled to freedom and who lived in those camps after the war.

Posted by Angela Y. Walton-Raji at 5:49 PM 3 comments: Links to this post