Several days ago, the new website Mapping the Freedman's Bureau was launched. The purpose is to encourage researchers to research their ancestors during those critical first years after the Civil War. As a result, the site was created to encourage more researchers to use these records as they are becoming digitized by both Family Search, and also the Internet Archive. Some sample documents can be found on the new website and it is hoped that all of the records will be considered essential records as more begin to look at their community history with the aid of these digitized records. Among these records to explore, are hospital records.

In those critical years after some had set themselves free from bondage, and took refuge in contraband camps, one of the many challenges facing the post civil war population was one of health. In many cases disease took lives of the refugees seeking aid. As a result a good number of hospitals arose as the demands for health care suddenly increased.

From every state where there was a new population seeking aid, and in temporary housing, measles, yellow fever, typhoid, and other epidemics arose. In addition, injuries, childhood infirmities and catarrh were also common, all of  which had to be addressed. What resulted were records of patients, being treated in those hospitals and also of those employed in those "Freedmen" hospitals. 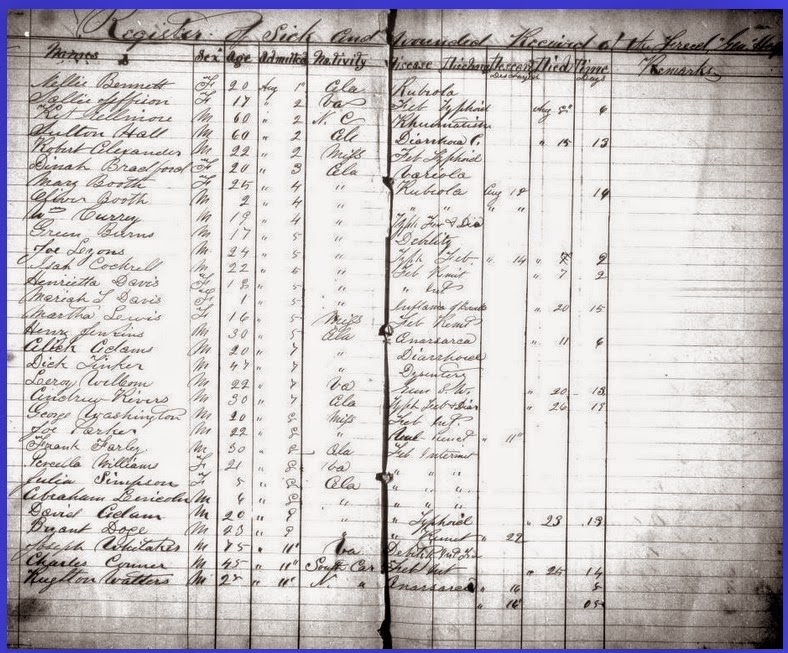 The new mapping site should be used for those who are seeking knowledge about the ancestral community. The site, allows the researcher to zoom in, and to focus on the local community from various perspectives. If there was a  Field office, then there may have been a school, a hospital, and possibly a contraband camp nearby. Everyone is urged to use the tools provided on the maps to learn more about the ancestral community

The Freedmen's hospitals are unique because they also provide data about the nature of public health in the early post Civil War days. One can study the kinds of diseases that affected a population that had possibly been transplanted into a new community after the war.

Another advantage is that in many cases genealogists who use the 1900 census note that a female listed the number of live births, but sometimes only a portion of the family can be found. Where were the other children not in the 1900 census? Were they separated by slavery and its system of separating mothers from babies? Or could the child have been ill and died during those years of transition to freedom?

All answers will not be found, but hopefully the mapping site will become a useful tool for one to have reason to explore the records of the Freedmen's Bureau with enthusiasm and vigor.

Posted by Angela Y. Walton-Raji at 4:07 PM No comments: Links to this post

Beginning of a Milestone Year - 2015 In the Spirit of Freedom 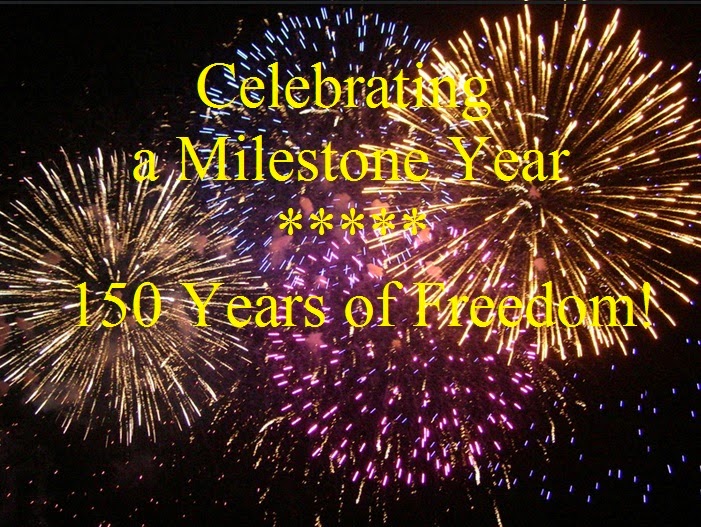 This new year is the beginning of a milestone year!

So yes---this is a milestone year! But strangely there are no celebrations of this incredible year! I know that for the past five years we have seen all kinds of celebrations reflecting the events pertaining to the Civil War. From 2011 when there were events noting 150th anniversary of the first shots fired at Ft. Sumter in 1861. And over the years there have been re-enactments of various battles fought from Gettysburg to Olustee. A simple google search on the 150th Civil War anniversary will reflect that.


It is great that the Civil War's ending is noted by people today, But the war was not simply battles--the war was about people. As a genealogist, my job is to tell a story about those people, many of them my own people, and to place the ancestors on the proper historical landscape. My ancestors were there during the Civil War and I am obligated to tell that story.

Some of them were soldier, true freedom fighters. My soldiers on the Bass side served honorably in the 111th US Colored Infantry. They were captured and managed to escape from the notorious N.B. Forrest.

Civil War Service Records of 4 soldiers from Giles County who were captured and who escaped. Capture was at Sulphur Trestlein the fall on 1864, under N.B. Forrest.


Other ancestors were self-emancipated---when the chance came---they left. They walked a very hard walk from Mississippi to Tennessee. Upon arrival they were then taken to President's Island contraband camp. 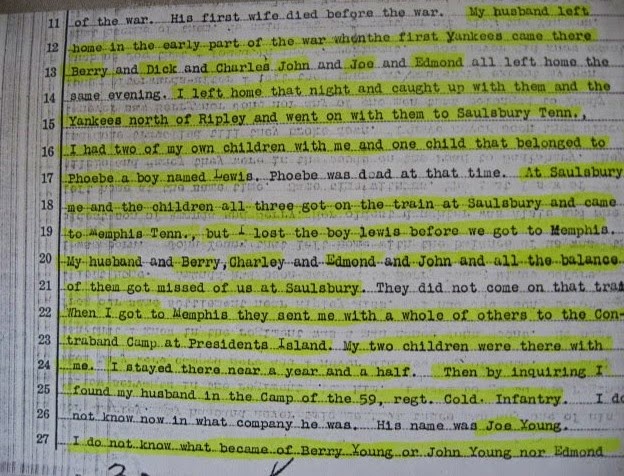 And yet others stayed back home because they were not able to travel and in fact had been taken away during the war so they would not escape.

So, as  I look back at 1865 and I know that the legal status of my ancestors changed during that amazing year, and that my ancestors emerged as survivors of a heinous system.

As survivors they laid the foundation for my family to continue to thrive today. Therefore, I have a commitment to not only tell their story, but to celebrate the precious legacy of freedom. I am committed to honoring their own struggle for freedom and I am obligated to tell the story of how they found freedom. And of course I am committed to sharing data of the beginning of their lives finally lived out as free people.

My hope is that others in the genealogy community will begin to honor this sesquicentennial year as well. I leave the following suggestions for bloggers to explore, in the spirit of Freedom.

Find your ancestor's story of freedom
Learn the community's story--how were slaves freed in the town,in the county.
Extract the many stories of freedom in the many Freedmen's Bureau records, Freedman's Bank records, Civil War Military records, old newspapers. Search for them, read them--and share them!

Posted by Angela Y. Walton-Raji at 4:08 PM 2 comments: Links to this post