Honoring the Ancestral Voters and Committing to Voting Today 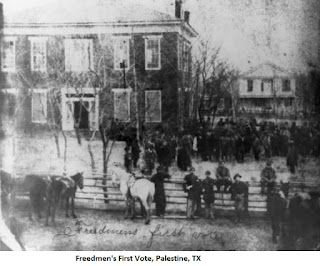 Did my ancestor's vote? I have evidence that many of them did, and so did many freed people take advantage of their ability to participate in a process denied to them for centuries.

Well, one of the treasure in researching my Bass family is that of an 1867 voting record, of Uncle Napier Bass. He is the first of many cousins bearing his name. He was taken to Texas in 1860 from Elkton Tennessee. He remained there after freedom, and made Fayette County Texas his home. His name appears on a Voter Registration document from the county that was made in 1867. His name on this record reflects the first time an ancestor's name appears on a record reflecting his having been a voter. It is therfore, fitting that on election day that I share this image.

The oldest document reflecting one of my ancestors as a registered voter.

Having cast my ballot this morning, I feel a remarkable sense of relief. So glad that what has been an 18 month process with early televised debates, I am so happy that it is finally coming to an end. And this year's process has been remarkably disturbing with one candidate offending almost every segment of society. The candidate of hate (who shall not be named) has made this a frightening time for me and for those whom I love to be in this country, has made me fearful of the future. As a person of color the hateful tone of this election season and the support of the candidate of hate, reflects widespread support for a bigoted man. And more disturbing has been to see the support even coming from those who once had my respect, and this has been most unsettling. I know now that I might not be safe around them. I shall have to note more closely my movements and associations in the future. 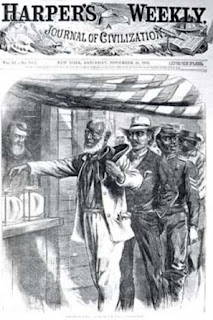 
However today, after casting my ballot, I feel a sense of relief and calm.

The long lines this morning were comforting to see. Heavy voting suggests that the people have a voice and they are determined to see that some good things will happen and that some things will not happen. And I am grateful for those leaders of the past that made the past two elections possible. 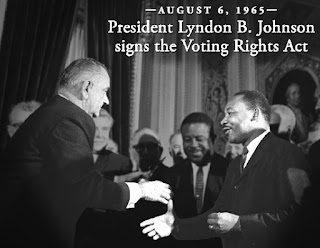 As many of my friends and relatives in the south only got to vote in the 1960s, I also think of the many who were terrorized, beaten, and killed for simply trying to vote. They are honored every time that I vote, and I am humbled when I think of them.

And as a woman, I am also humbled. I think of the many who fought for voting rights for many years, and who also suffered. Women like Fannie Lou Hamer, endured beatings and who fought nevertheless for voting rights in Mississippi. She dared to tell her story to all in 1968.  Yet, many who saw her speak then, still defend their support of a hate filled candidate (who shall not be named) who wishes to go back to the "great days" that were not so great for people of color, when Fannie would be beaten for her work. 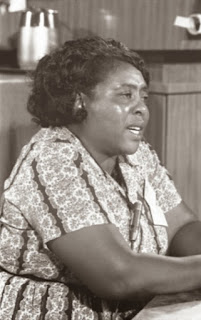 Fannie Lou Hamer at the Democratic Convention in 1968

And I think of the women also who further back in time fought and marched so that women could also vote. The women were truly souls of courage and grace, deserving our respect and honor. From the unknown suffragettes such as Hattie Redmond of Oregon to the well known Susan B. Anthony, I was truly honored to vote today.

And the most moving image of the day has been watching a live broadcast of people in Rochester New York, visiting the grave of Susan B. Anthony. On a day in which a woman's name is on the ballot for president, it is fitting that on a day when history is being made, to see people visiting her grave, and thanking her for her work. This has truly moved me. 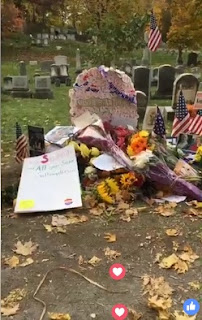 Image from Live Feed of Visitors to Susan B. Anthony Grave
(Courtesy of WROC-TV. Rochester NY)

I reflect and know that recent efforts by an obstructionist Congress to suppress the 14th Amendment and the 15th Amendment have been disheartening to say the least and destructive to the country, and their efforts have instilled fear in my heart. My sense of safety and well being have been affected by such blatant racism and hatred being shown by elected leaders.

But for some reason, I now have a feeling now of optimism and that the nation has seen the evil emanating through endorsement of hate coming forth, and I pray that they will stop the descent and rise.

What an awesome power lies within one's ability to vote. I feel therefore inspired to share a few images from the past of people once denied, finally exercising this incredible task of voting. It is a right and a responsibility to make a nation better. And it is a responsibility to keep it from back-sliding into a era of blind intolerance, bigotry and racial superiority.

The heinousness of it all can and will be blocked by the actions of a people who will not allow it to happen. 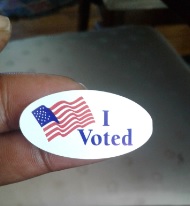 I care, therefore I vote!
Posted by Angela Y. Walton-Raji at 12:01 PM No comments: Links to this post