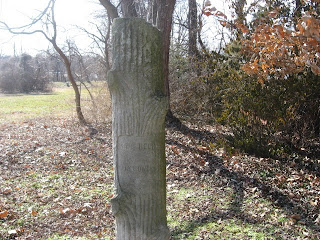 Most of us who enjoy visiting cemeteries, recognize their headstones. They are beautiful and truly unique, many shaped like logs, or tree trunks and are elaborate in their design and always catch the attention of visitors to many burial grounds. Those belong to the Woodmen of the World.

But there is another organization worth exploring---It was also a Benevolent society with death benefits--The American Woodmen. This was a Black organization.

The history of this group is most interesting. It actually began as a white organization, not unlike the Woodmen of the World. However by 1910 this became an all African American fraternal society. Laurence Lightner was one of the major leaders of the American Woodmen, and held his position for over 20 years. 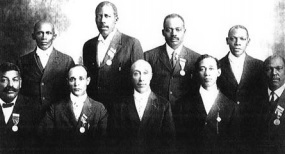 Early Leaders of the American Woodmen

Community service and family oriented values were among their areas of focus. And of course there were the benefits paid to the families of deceased members, while also emphasizing philanthropy, and help to others for all members.

Their chapter groups were often referred to as Camps, and the greater body was known as the Supreme Camp of the American Woodmen. During the early 20th century years, the group was well known for paying benefits efficiently and also took note of their success in raising funds. An interesting article in the Kansas City Sun from 1919 addressed the efficiency of the American Woodmen. 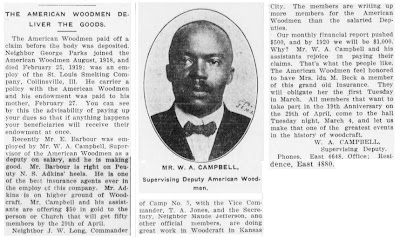 The American Woodment also were among the more generous of the benevolent societies as they paid not only death benefits, but they offered a number of programs for members. This may have contributed to their longevity.  An advertisement from The Kansas City Star in a 1917 edition reflected the many offerings to their members. Their benefits included: death benefits, sick benefits, accident benefits, old age annuity and more. 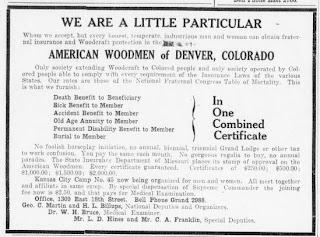 The latter half of the 20th century saw many changes in the control of the life insurance function of the Woodmen, and many efforts were made to control the assets of the American Woodmen insurance funds that exceeded $10 million dollars. In 1994 the group finally merged with the Woodmen of the World.

Earlier this year, when visiting Ft. Dickson's cemetery in St. Louis, it was quite a surprise to see a headstone reflecting the American Woodmen. This is an historically black cemetery and the log style stone immediately caught my attention. It was only the second such stone reflecting the American Woodmen that I have seen, and I captured a photo of the stone at that time. (see image at top of this article)

It is evident that the American Woodmen had a cadre of focused dedicated people for decades, as this was one of the few societies that did not fold during the years of the great depression. Their legacy is an impressive one, and this is an organization that deserves further study as one explores the history of the Black Benevolent Societies.

Posted by Angela Y. Walton-Raji at 4:27 PM 5 comments: Links to this post

Fireworks as seen from my hotel window

Well the 2013 FGS Conference has gotten underway and it has been exciting with everything from Fireworks to fire alarms. Now admittedly the fireworks appeared to come from a nearby ball park but all on my side of the hotel got a wonderful view, and what a fitting way to end Thursday evening--the first full day of workshops at this year's conference.

Everything from the exhibit hall to the sessions were full of energy! I had the chance to conduct research all day on Wednesday, but by Thursday, there were plenty of events and vendors to visit and sessions to attend to stay busy!!

The usual larger vendors were there, but also so were the smaller venders. A favorite vendor was a woman who turned her father's letters from WWII, into a beautiful book called A Thousand Letters Home. Her work is a perfect example of how one can turn artifacts into something that not only the family can enjoy. But in addition, others who would like to read how WWII directly impacted someone's life will find her work also of interest. 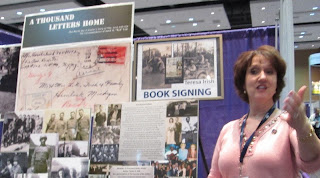 A Thousand Letters Home, booth and book on display.

I also worked the FGS Booth part of yesterday. We were working to encourage participants to participate in the effort to Preserve the 1812 Pensions, and was impressed to see such enthusiasm for the Save the 1812 Pensions Project. Many people came by the booth to purchase tickets. 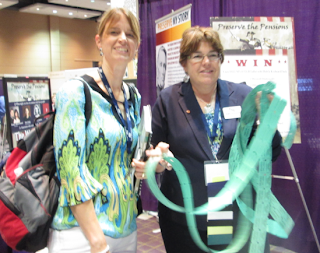 Polly Kimmit of the FGS Board, holds long row of tickets before handing them
to an eager visitor anxious to support the Pensions project.
Friday was especially busy for me, because I had two presentations. My first session focused on Forgotten Beneficiaries. Finding Southerners Black and White Served by the Freedman's Bureau. This session was also the James Dent Walker Memorial Lecture. It was an honor to give this presentation and to speak about a topic that he frequently spoke about. I got good feedback, and was pleased that good questions were asked and there was true interest in the subject. 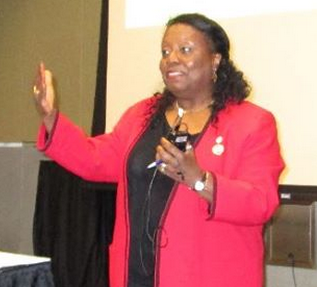 My earlier presentation on the Freedman's Bureau records

In my second session on the Benevolent societies I spoke about the various contributions made by these societies to the community at large, in particular hospitals. I mentioned one hospital built in the 1940s on the Mississippi Delta, called Taborian Hospital, built by the International Order of Twelve Knights & Daughters of Tabor. Afterwards, a gentleman came up to me and mentioned that he actually practiced medicine at that hospital. That was an amazing surprise.

The evening ended with a nice event at a local bed and breakfast where the African American Genealogy Society of Ft. Wayne hosted a few of us for some light refreshments in the evening. The beautiful old house was a comfortable place to get away for a few hours and simply unwind with a nice glass of wine and some light food. In addition, we also got a chance to talk shop--genealogy--informally with some of their members. One of the members was able to bring a brick wall question with her and to get some suggestions on where to go next with her research.

Ft. Wayne resident gets some advice on where to get more information for her projects

The afternoon was not without it lively moments when  suddenly an emergency was announced and orders were given to evacuate the building. Of course as the quickly as the building was being evacuated, no emergency surfaced at all, and all returned to their previous spots.

So the day was a busy one for me, with two sessions, and I have a final session tomorrow, before beginning to  pack for the return journey home on Sunday! This has been a most delightful trip so far, and tomorrow promises to be just as busy.