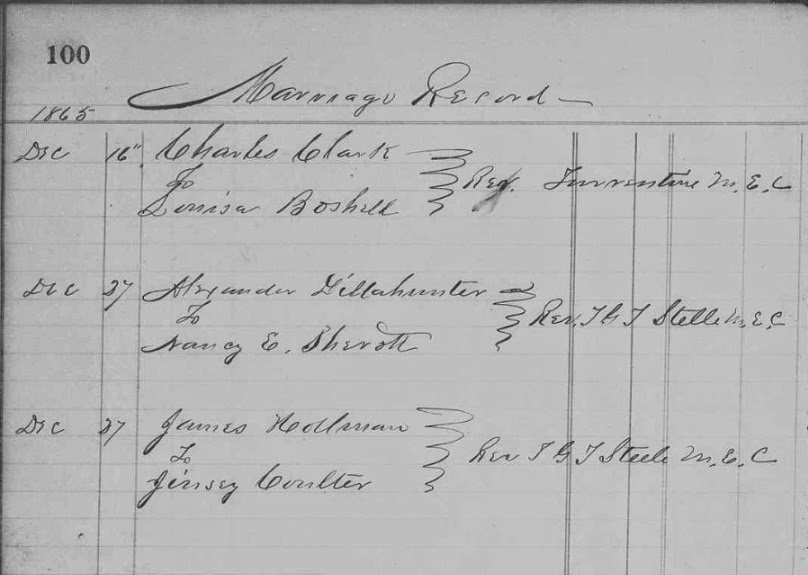 One of  the first acts of freedom when the Civil War ended, was the opportunity for men and women, once held in bondage to freely marry whom they wished to marry, and to have their marriages recorded so that their commitment to each other would be known by all. This act was so important to former slaves, since up until that time, their spouses could be snatched away, sold never to be seen again. Thankfully a few such records of those first marriages could be found.

In Sevier County Arkansas, one of my ancestral communities, I found three couples who are among the very first African Americans who dared to have a ceremony performed by an official at the Freedman's Bureau. The community was Sevier County Arkansas located in the southwest portion of hte states. In December 1865 three couples were married by the chaplain in charge of the Paraclifta Field office. They are not related to me directly, but one of the names did stand out, as it was a name that my family mentioned over the years as being close neighbors, and even tenants in later years on and in recent generations even cousins.

The Freedman's Bureau, officially known as the Bureau of Refugees, Freedmen and Abandoned Lands, operated in multiple states, and the purpose was to provide some assistance to newly freed slaves.

One can only imagine the fears of having to suddenly "conduct business" in a community where before the war, one could not even walk on the roads without a pass, or permit. Therefore finding these marriages--one can imagine the fears of approaching the courthouse to obtain a marriage license, when, before the war, the closest one came to the courthouse was when one was being auctioned to the highest bidder--as property--human property.

So, the significance of these three marriages, written in a Freedmen's Bureau ledger, is significant. These three couples were married, and their marriages were from this time forward to be recognized as legitimate bonds between two people who loved each other. This is one of those times in which their status as human beings was being inscribed for the first time in the county where they had lived, toiled, and their ancestors had died.

I was thrilled to find these names and hopefully descendants of these families will someday find this ledger, print and appreciate it for the gem that it is. At the creation of this simple marriage ledger, the trajectory of these three families was forever changed. They were no longer human chattel to mistreat, ignore, and trade. They were husbands, and wives, who would become the matriarch and patriarch of families now free to move forward in a new world.

I recognized the "Dilahunter" name. My grandmother who was the daughter of Louis Mitchell Bass, often spoke about her neighbors the "Dillahunts". I later noticed that the "Dillahunts" were actually "Dillahunty" and the name sometimes appeared in the records also as "Dilahunter".

Seeing the names of the first Black marriages performed in the very year that slavery ended, is humbling indeed. Also it should be noted that the 13th Amendment to the US Constitution was officially ratified in December of 1865, the same month in which these marriages were performed.

It took some time for the larger white community to acknowledge that those once held as property were indeed free men and women. But these six people--these three couples were among those who courageously took some of the first steps and dared to make their mark upon the ledger of the free.

Posted by Angela Y. Walton-Raji at 6:02 PM No comments: Links to this post